Italian.SE to remain in private beta for another week

Update: After a week's worth of solid work from this community, the team has reconvened and agreed to move Italian.SE to public beta. Nice job!

The public beta switch should get flipped some time Tuesday (19 November). We've seen excellent improvement in the areas I mentioned below. Furthermore, we realized that the nature of the Italian languages (or more correctly, the group of Italian languages) means that this site will be a little different than our other language sites. All in all, everything looks good, and we're ready to open this site up to the public.

The SE Community Team evaluates private beta sites on a weekly basis to determine whether they should remain in private beta or launch to the public. Based on the stats and activity we've seen so far, Italian is doing pretty well, but it has a few things to work on. We've opted to hold it in private beta for another week while we watch for improvement in a couple of areas.

Private beta is the time to build a solid base of high-quality questions and answers to serve as examples to the greater community. In that vein, we would like to see some attention paid to the types of questions being asked. Out of 60 questions asked so far, I count 18 as dictionary or "this vs that" questions - which is a little worrying. It's impossible to avoid a few of these questions on a language site, but such a high percentage at this early stage sets a possibly bad example for the future. Is this a site for Italian writers and those moving beyond introductory learning resources, or is it "Italian Language Learners", for beginners?

Possibly, this community could decide that it wants to focus on these questions and still succeed. It's just something that needs to be decided here in meta. This community has done an excellent job so far of tackling the nuts and bolts of setting up a language Stack Exchange site - language requirements and style concerns have all been tackled very early on, which is important. What we need to see now is some discussion of scope and quality.

This a manageable that you guys should have no problem improving by a reasonable amount in a week's time. Have at it!

Thanks for the heads up Abby, we'll work on it.

However I feel like opening the beta to the public will result in more interesting questions coming in. So far we have a great majority of native speakers on the site, meaning a lot of people very oriented to answering questions rather than asking them.

I perceive this site as intended both for

I don't feel the urge of focusing on either one of the above audiences, even though I agree that questions in the form X vs Y are not good examples for future visitors.

Bottom line I respect the decision and I agree that we should set our quality standards before opening to the public.

I can understand the decision, but for the questions asking about a word, I would add the following.

In Italy, the official language is Italian, but different regions have different languages too; despite the fact they are called Italian dialects, they are not dialects of Italian, but rather dialects spoken in Italy. They are not mutually intelligible with Italian, and I would not assume every Italian understands el ga fat pàla.
As consequence of this, in some regions of Italy you could hear expressions that are not understood from other people. Those expressions are translations of expressions used in the dialect spoken in that region. It is common for people with a low instruction and who try to speak Italian to literally translate an expression they use, word by word; often, those translations are used equally from different people, and they become part of a idiolect.

As for the dictionary always answering those word questions, I would show a real case: In the dictionary I found me' (not me) which is said to be the short for meglio (better) and that in Northern Italy mèi is instead used. Well, I was born and raised in Northern Italy, in that region called Lombardy. I can assure you I have never heard me' being used; if I heard somebody saying è me', I would understand that as sono io said from somebody who normally speaks one of those Italian dialects. Furthermore, méi is for me a Eastern Lombard word, not an Italian one; I would expect it being used by people who didn't go to school or didn't go past elementary school, and who try to speak Italian. 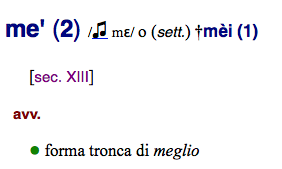 Reading that in the dictionary, I would wonder who really understands me' as short for meglio, and I could ask a question.

I understand that it is probably better to ask about phrases, but sometime people wonder about a single word, and dictionaries don't report the usage of a word in such a specific way to make them understand in which region of Northern Italy the word is used more often than other places. Considering that sometimes the word is used just in a town, I can understand why some questions are asked.

22
Are questions about dialects on topic?
5
Many questions, few accepted answers

3
Do we have linguists and/or people with general background but interested in Language as a whole?
5
Downvotes and private beta
15
Moderator Pro Tem Announcement
5
How is this fledgling site doing?
5
Repeated abusive behaviour from user
12
Help ensure English speakers can participate on meta
3
This is not a site for Italians!
3
Question deleted soon after receiving an answer
6
No appropriate close reason for “translate this sentence for me”